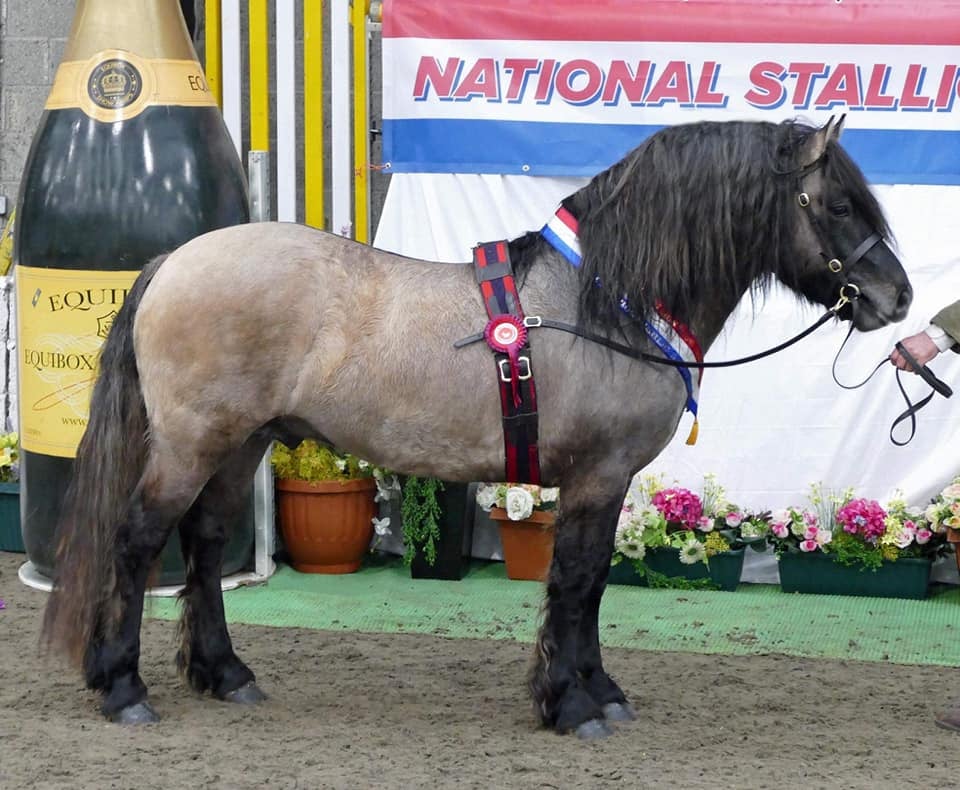 About The National Stallion Show

A bit of history

The Glasgow Agricultural Society itself came into being in 1857, but it is certain that stallion shows were being held long before 1860 – the date of the first show organised under the Society banner, although, there is evidence of stallion shows of some kind having been held as far back as 1844. The show has missed only one year since – due to the Foot and Mouth outbreak.

In the early days, the purpose of the show was for the hiring of Clydesdale stallions to travel the various districts of Scotland, the northern counties of England, and quite a number were also selected for Ireland. Horse breeding societies, fostered largely by the Highland and Agricultural Society, were well organised throughout the country. There appears to have been as much competition to secure the best animals as there was to secure the prizes at the succeeding shows.

In the early days, numerous societies advertised their requirements and stated their terms. The highest terms were 40gns and a silver medal; in addition, there were service fees and these varied considerably. Foal money appears to be a later addition. It was indeed a busy day at the Glasgow Cattle Market when all the deputations met to select the premium horses, apparently several rings had to be erected to accommodate all the deputations.

At the show, held on February 24, 1860, the main business seems to have been the hiring of horses for the Glasgow district; the Dunblane, Doune and Callander Farmers’ Club and for the island of Bute.

The report of the show in the Glasgow Herald the following week occupies only eight lines. “There was” it says, “a fine display of animals, but the spectators were not so numerous as on former occasions.” (An indication in itself that this was not the first ever show).

“There were 15 entries and after careful selection, the premium was awarded to Lothian Tam, a bay horse from Mr Salmon, Benston, by Johnstone. For the Dunblane club the winner was Champion, a horse owned by Mr Kerr, Lochend, Kilbirnie, and for Bute, General Williams, shown by John Barr, Barrangary, Bishopton.

The show was held in Glasgow Cattle Market in its early days and towards the end of its time there the whole market was taken over to house the number of entries. The summer show, also organised by The Glasgow Agricultural Society, was held at that time in Queen’s Park Recreational Ground.

The idea of a permanent site for the show took shape just before the turn of the century and the first show at Scotstoun was held in April 1900. That of course was the summer show, a two-day event.

This was Scotland’s first permanent showyard. It was thought that “the sum of £7000 would be sufficient for the purpose”, but by the time it was completed it cost £9000. Much of the capital was raised by debentures and the subscribers fared rather badly in their investment.

The show continued to be held at Scotstoun until 1993, but for a few years in the 1960s when it decanted to the Kelvin Hall, Glasgow. Then from 1994 to 1996 it was held at United Auctions’ Kildean market in Stirling, before heading further north to Perth Agricultural Centre, and in 2010 back south to United Auctions’ newly built premises – Stirling Agricultural Centre.

There are many great Clydesdale sires which have appeared at the Stallion Show – in the 1800s, Darnley was arguably the sire with the most show championships to his name, however Prince of Wales and Baron’s Pride, sire of Baron of Buchlyvie, were the sires with the greatest influence, but without a Stallion Show career.

Hiawatha, bred by William Hunter, Garthland Mains, Stranraer, in the 1890s, and later owned by Matthew Marshall, Bridgebank, Stranraer,and the John Pollock, Paper Mill, Langside, Glasgow, is the only horse to have one the Cawdor Cup four times – and four times in succession. In the beginning, Hiawatha was almost a complete failure as a breeder, leaving only two foals in his first season and not many more the second. He gradually recovered and was to become one of the most prolific sires of his time.

Dunure Footprint also occupies a place in Clydesdale history. He stood first four years in succession at the Stallion Show before winning the Cawdor Cup in 1910. As a breeding sire, Footprint was phenomenal – at the height of his fame he is reputed to have been mated to 400 mares in one season. He certainly left some inferior stock, but that was inevitable in view of the extent to which he was used, but his prizewinning stock were legendary. In all he sired no fewer than five male and five female winners of the trophy. Thus, he figures as the sire, or as a sire of a dam of 22 Cawdor Cup champions. His nearest rival is his own grandson, Baron’s Pride with 18.

Benefactor was another sire worthy of note – his head still features prominently on the cover of The Clydesdale Horse Society stud books, and indeed on the back cover of our catalogue today. At a time when the country was flooded with Dunure Footprint mares, Benefactor was the natural cross. Footprint left a heritage of weak fore feet, and in some cases, lack of weight and substance – these were some of the qualities that Benefactor had in abundance and passed to all his progeny. In all five of his sons and two of his daughters were Cawdor Cup winners. His son Benedictine left no fewer than seven Cawdor Cup winning daughters, five of them being shown by John McFarlane, Ballielands.

The outsanding personality around the turn of the century was James Kilpatrick of Craigie Mains, and indeed some family were still to the fore right up to 1960. The Kilpatrick’s won no fewer than 18 Cawdor Cups, three of them being won outright.

Another of the outstanding exhibitors as Scotstoun was the Clark family, particularly Thomas Clark, Muirton, Perth. He supplied no fewer than six Cawdor Cup champions while his younger brother James, then in Windlaw, Carmunnock, supplied one, and his older brother, Alex Clark, Strathore, was the exhibitor of Strathore Imperial the yearling winner of 1937, but unfortunately he died shortly after his victory. TW Clark & Sons were the winner of the 2011 Cawdor Cup with Muirton Sabre.

Since 1960, one family, has without doubt, dominated the Clydesdale headlines – that of the late John Young, Doura, and his son Jim, with the Greendykes prefix. The Young family have won the Cawdor Cup no fewer than 19 times, four trophies being won outright. The first win for John Young was in 1965 with Doura Ambassador. Other memorable winners include Doura Excelsior, Doura Masterstroke, Doura Expectation. Doura Sir Charles and Greendykes Benjie.

Other exhibitors to have won the Cawdor Cup more than once since the 1960s include John Chapman, Johnston, Gartcosh, with Johnstone Realisation and Johnston Leader; Jim Picken, Torrs, with Torrs Renown and Torrs Pointsman; Peter Sharp, Nether Logie, Eassie, with Bardrill Enterprise and Bardrill Refiner; and Ronnie Black, Newton of Collessie, with Collessie Independant and Collessie Cut Above; and Robert Hamilton has done extremely well in recent times with Dillars Leader, Dillars Scottie Boy and Dillars Striker, all lifting the prestigious trophy.

The beginning of the 21st century has seen a number of new names being engraved on the Cawdor Cup including William Dow & Carol-Anne Johnston with Kelvinhead Express; P & W Bedford with Deighton Designer; The Hon Mrs Henry Douglas-Home with Old Greenlaw Lochy; Matthew King with MGK King of the Ring and Noel Porter with Roeshall Calypso.

As far as can be made out from the record books, Highland Ponies first appeared at the National Stallion Show in 1964, while the show was held in the Kelvin Hall. That year Hugh MacGregor and his son Scott, aged just 16 last the time, of Ballinton, Thornhill, took the top award with Glenearn Beautility.

It was Hugh MacGregor who instigated the appearance of Highlands at the show, and since then the MacGregors have gone on to win the supreme championship on numerous occasions and more so than any other exhibitor.

The main studs competing in the 1960s – 1970s were Ballinton, Whitefield, Campsie, Lundie, Broadshade, Turin Hill and Trowan. Of these studs only Turin Hill, Whitefield and Trowan remain today with Hamish Cameron carrying on the Turin Hill stud following the death of Mrs. Compton, the Baird family continuing the work of the late G. M. Baird and of course the inimitable Robert Davidson at Trowan.

Since the mid 70s/80s with the massive increase in popularity of Highland Ponies, new studs have appeared all over the U. K. and abroad. Whilst we still have to have an exhibitor from abroad, the 2009 champion although Scottish Bred had been re-imported from the Netherlands.

As with Clydesdales new names continue to appear on trophies such as Chapelhill, Strathmore, Sunnyneuk, Tower, Moss-side, Mendick to name but a few, all being consistent winners on the showing circuits.

On the same day, the Highland Pony Society used to have a Stallion Parade and indeed at one time a Premium Parade was held when grants were awarded to the owners of mares who used these carefully selected stallions on registration of a live foal. For various reasons this has now been disbanded. The Highland Pony breed continues to make a valuable contribution to the success of the National Stallion Show and no doubt will continue to do so well into the future.

As for the Shetland Ponies, Dougal Dick, Devonshaw, Dollar, has catalogues kept by his grandfather dating back to the 1800s and has records of a “Glasgow Show” dating to 1902. He presumes this to be the Stallion Show – indeed his grandfather won the championship in 1902 and again in 1907, 1908 and 1909, and up until 1914. Like Scott MacGregor, Dougal himself can remember showing at the Kelvin Hall in the 1960s.

At that time the most prominent studs were Marshwood, Kirkbride, Harviestoun, Transy and Netherley. Three of these studs have now gone but to this day Harviestoun and Transy remain, with other studs such as Millhouse, Kerryston, Lignite, Kinness, Kinkell, Eynhallow and Mawcarse being some of the consistent winners on the showing circuit.

The ever growing popularity of miniature Shetlands saw the introduction of classes to the National Stallion Show in the mid 90”s. It was not however until 2010 a miniature from Lorna Jamiesonʼs Lignite stud rose above the standards to claim overall championship.

The entries of Shetlands continue to flourish with single exhibitors known to have seven or eight entries. An abundance of trophies in the Shetland Section make the classes well supported and keenly contested.

Accommodation at The National Stallion Show 2022

Login to “Entrymaster” using your username or email address if you have used the Entrymaster system anywhere before or click “register” to enter events, buy tickets or pay subscriptions.